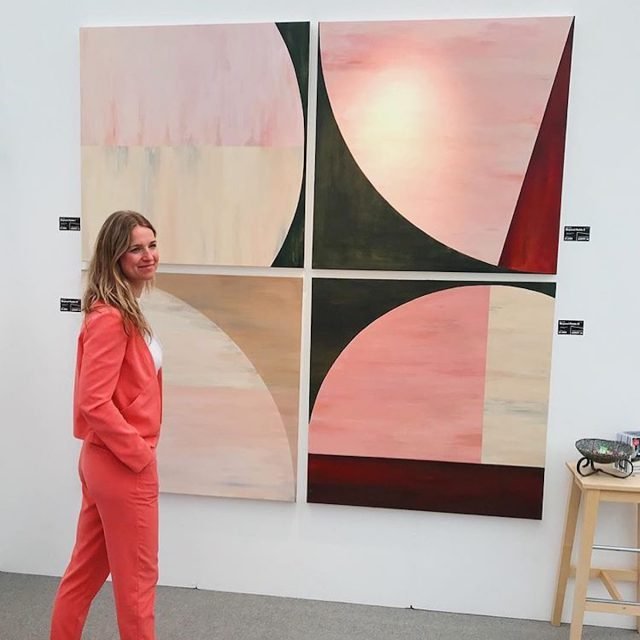 You are probably wondering what on earth these circles are all about.  For most of us they satisfy some psychological desire for symmetry and proportionality.

A preference for circular shapes is deeply ingrained in all of us from birth. The circle embodies all of the attributes that attract us: it is safe and evokes calmness, peacefulness, and relaxation. These words are taken from Manuel Lima who wrote all about the psychology of circles in his aptly named book ‘The Book of Circles‘.

There are SO MANY studies about why we find circles so beautiful but for me there’s more to the reason I was inclined to put paint on canvas.

I’ll start from the beginning. 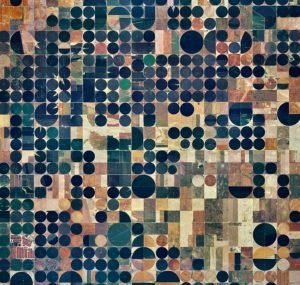 The centre-pivot irrigation circles of the Great Plains and the American Northwest are impressive both in their scale and collectivity.  Aerial photographs of them convey an image of order and precision. A vision of beautiful simplicity, they are a symbol of modern industrial agribusiness. These fields seen from above, cast an imposing mark upon the world.  This made me stop to consider how they came to be and look into the impact they have on our planet.

Beyond the minimalist beauty of the image lies a frightening reality.

Farmers in the Great Plains of Nebraska, Colorado, Kansas and Texas produce about one-sixth of the world’s grain. This grain is needed to feed the 7.5 billion people on the planet. A figure that will rise to almost 10 billion by 2050 if growth were to continue at the current rate.

Increased population would require more grain to feed them.

The source of water for the farms of The Great Plains is the Great Plains Ogallala Aquifer. This is the single greatest source of groundwater for the Northwest. Groundwater is pumped from the aquifer which flows into the irrigation systems supporting this network of croplands. Globally, irrigation accounts for 90% of human water use.  Since the 1950s, pumping has extracted nearly as much water as what exists in Lake Erie— about 100 trillion gallons. Almost none of it trickles back into the aquifer.

From 1950 to 2010, a total of 350 miles of stream dried up in the large area spanning across eastern Colorado, southwestern Nebraska and northwestern Kansas. Moreover it is predicted that a further 180 miles of stream will dry up by 2060.  This will mean an end to agriculture in this region as it exists today. It will also mean the loss of whole populations of the fish that inhabit the rivers in that region.

Based on aerial photographs, my Salt Flat series drew colour, line and texture from natural formations – though of course these too may have been impacted by human activity.

Differently, this series actively looks to human creations and I find the symmetry of the human footprint jarring in juxtaposition to the wind and water worn world. The balance of the view from above in Beyond Fields is easy on the eye but this comes at a cost. Industrialisation brings water shortages and soil degradation.

As consumers we all have a responsibility to know and think about where our food comes from.  Specifically what sort of farming practices are involved and how much we waste.  Most worryingly, despite the advances in modern farming that this series notes, 793 million people in the world are undernourished and one third of all food is wasted.

We have a responsibility to conserve and ensure resource efficiency.

See my work on this series here.